Catalina de Erauso was daughter and sister of soldiers from the city of San Sebastián in Spain. Her father was Miguel de Erauso and her mother María Pérez de Gallárraga y Arce. She was expected to become a nun but abandoned the nunnery after a beating at the age of fifteen, just before she was to take her vows. She had not ever seen a street, having entered the convent at the age of four .

She dressed as a man, calling herself “Francisco de Loyola”, and left on a long journey from San Sebastian to Valladolid. From there she visited Bilbao, where she signed up on a ship with the assistance of other Basques. She reached Spanish America and enlisted as a soldier in Chile under the nameAlonso Díaz Ramírez de Guzmán. She served under several captains in the Arauco War, including her own brother, who never recognized her.

After one fight in which she killed a man and was wounded fatally, she revealed her sex in a deathbed confession. She however survived after four months of convalescence and left for Guamanga.

To escape yet another incident, she confessed her sex to the bishop, Fray Agustín de Carvajal. Induced by him she entered a convent and her story spread across the ocean. In 1620, the archbishop of Lima called her. In 1624, she arrived in Spain, having changed ship after another fight.

She went to Rome and toured Italy, where she eventually achieved such a level of fame that she was granted a special dispensation by Pope Urban VIIIto wear men’s clothing.

Her portrait by Francesco Crescenzio is lost. Back in Spain, Francisco Pacheco (Velázquez‘s father-in-law) painted her in 1630.

She again left Spain in 1645, this time for New Spain in the fleet of Pedro de Ursua, where she became a mule driver on the road from Veracruz. In New Spain she used the name Antonio de Erauso.

Today is the feast of the early English saint, Walburga, who entered the abbey of Wimbourne aged just eleven, then as a young sister was sent to accompany her uncle St Boniface to Germany, where they founded the “double monastery” of Heidenheim.

Read the full report , “Feb 25th, St Walburga, Missionary, Abbess,” at National Catholic Reporter. As you do so, pay close attention:  the text reminds us of so much that we have forgotten about the real history of women in the Church.

END_OF_DOCUMENT_TOKEN_TO_BE_REPLACED

Queen Esther, a role model for LGBTQ people, helped save the Jews from destruction in ancient Persia, an event commemorated today in the Jewish festival of Purim (Feb. 23-24 this year). LGBT Jews see her as an inspiration for coming out. A possible lesbian love story between Biblical queens Esther and Vashti has fired the imagination of a lesbian playwright, while a scholar says both queens are role models for gay and lesbians in ministry.

Esther hid her Jewish identity in order to become the next queen of Persia. Later she “came out” as Jewish to the king, thereby saving her people from a planned massacre. Their story is told in the Book of Esther in the Hebrew scriptures (Old Testament). Vashti was a Persian queen who refused to obey a summons from her drunken husband, the king.

The Washington Post article Gay Jews Connect Their Experience To Story of Purim reports that some see Purim as an unofficial LGBT Pride Day. Esther is traditionally considered the heroine of the story, but independent-minded Vashti has been reclaimed by feminists and now LGBT people.

Lesbian playwright Carolyn Gageimagined a love story between the two queens in her play “Esther and Vashti.” Gage describes her play as “a fast-paced, high-action drama where the love story of two women of different cultures and class backgrounds plays itself out against a backdrop of anti-Semitism and the sexual colonization of women.” Her “radical feminist retelling” fills in the blanks of scripture. In her version, Esther, a radical Jewish lesbian living in exile, and Vashti, a Persian woman of privilege, were lovers before Vashti married the king. The plight of the two women coincides with their successful effort to stop the impending massacre of the Jews.

Martin Duberman’s anthology, “Hidden From History”, includes an essay by James Saslow on “Homosexuality in the Renaissance”. One of Saslow’s key points is that at this time, men who had sex with men were not exclusive – in modern terms, they would more likely be described as “bisexual”. In a passage about how the rich and powerful freely made sexual use of their subordinates, I came across this throwaway reference:

Similar patterns prevailed among the clergy and educated humanists. Charges against Paul II and Julius II centred around their seduction of much younger men; Cellini’s autobiography records a beautiful and talented youth, Luigi Pulci, who made a career out of service to Roman bishops.

Now, I knew about Julius II  – and for that matter, Julius III – but this was the first sexual gossip I have come across concerning Paul II, so I explored further.  This is what I found: it seems he died while being sodomized by  a page boy.

Paul II died, on July 26, 1471 of a stroke, allegedly whilst being sodomized by a page boy. After his death, one of his successors suggested that he should rather have been called Maria Pietissima, “Our Lady of Pity”, because he was inclined to break into tears at times of crisis. Some historians have suggested the nickname was rather due either to Paul propensity to enjoy dressing up in sumptuous ecclesiastical finery, or his likely homosexuality.

Nor was he the only cleric who enjoyed some male company.  Here’s Saslow again:

The intimate living arrangements of the all-male clerical world and the opportunities that educational and religious duties afforded for privacy and empiotional intimacy, while not themselves “causes” of of homosexuality, may have contributed circumstantially to their expression.  Priests in fifteenth century Venice and Stuart Sussex were convicted of sex with young parishioners, unpublished records of church trials in Loreto, Italy, in the 1570’s detail the activities of a choirboy who slept successively with various older monks……

Remember, while Paul II was enjoying his adventures with co-operative pages, elsewhere in Italy and the rest of Europe, “sodomites” were being burned at the stake for their “sin”.Nor was it only Paul’s interest in boys that got my attention.  On his election as pope back 1464, the cardinals tried to rein in papal power (and thus to increase their own), by imposing a range of tight conditions, which:
Alas, for the best laid plans of mice and men……Paul II simply ignored these requirements, declaring  that election “capitulations”, which cardinals had long been in the habit of affirming as rules of conduct for future popes, could affect a new pope only as counsels, not as binding obligations. He then created a whole slew of new cardinals from his own loyalists.
Now, a half a millenium and more later, why does all this sound so familiar?
(Among his achievements, he was friendly to Christian scholars; he restored many ancient monuments; made a magnificent collection of antiquities and works of art; built the Palazzo di St. Marco, now the Palazzo di Venezia; and probably first introduced printing into Rome. Paul embellished the costume of the cardinals, and collected jewels for his own adornment.)
(Links to Amazon, UK)
(Links to Amazon.com, USA)

As LGBT Catholics, it is important to recognize that our counterparts have featured strongly in Church history, although modern bowdlerized versions thereof have airbrushed us out.  To redevelop a sense of our rightful place in the church, it is important that we recover and take ownership of this history.From a range of sources, I am assembling a partial roll call of same sex lovers (not necessarily genital, but certainly intimate) in the history of the Catholic Church.  There are many others. These are some that I have come across:

David the prophet and Jonathan, his lover (10th /11th Cent BC)

The story of David and Jonathan is well known from the Hebrew bible.  It is not explicitly stated that there was a sexual relationship between them but the passionate language  is certainly that of lovers.

“How delightful you are Caleh,My lover-man, my other half.Your pleasing masculine love is better than wine.The smell of your body is better than perfume.Your moustache is waxed with honeycomb.Honey and milk are under your tongue.The scent of your clothing is like the smell of Lebanon.”

A review of this book, posted on the Wild Reed, notes that:

“It gets to the heart of the question of whether the Hebrews and early Christians were fundamentally homophobic, or whether, as John Boswell has maintained, homophobia was a later addition. Johnson has consulted with many Hebrew scholars, who reluctantly concede the validity of his revolutionary word-for-word translation.”

The “Song of Songs” was recommended to me by a retreat director early in  the most important, totally profound, retreat I have ever undertaken.  She made no mention of gender in the recommendation, but I immediately interpreted the texts in same -sex terms.  I believe that such reflections on this book contributed  significantly to the powerful  retreat experience that followed.  I strongly urge my male readers in particular to read and pray over this marvelous homoerotic love poem.

Naomi was Ruth’s mother-in-law. Some people argue that there was also a lesbian relationship between them (which is not necessarily contradicted by the legal relationship).  What really matters though, is the sheer quality of the devotion. Whether this was in any way physical, or purely emotional, is no the point. Theirs is an inspirational story of devotion and loyalty overcoming enormous difficulties fro women, which many women in our day still find helpful.

We cannot know precisely the nature of this relationship, but it was clearly a close one.  some people find the mere suggestion that this was a sexually intimate one positively offensive; at least one reputable biblical scholar (Kevin Jennings, in “The Man Jesus Loved” argues that it was indeed so).  I find the idea certainly plausible without being offensive, but also irrelevant.  There are other reasons for accepting that Jesus was at least gay – affirming, and that John represents a good role model.

-for more, continue reading at Queer Saints and Martyrs

The Roman soldiers, lovers and martyrs Sergius and Bacchus are well known examples of early queer saints. Polyeuct and Nearchos are not as familiar- but should be.  John Boswell (“Same Sex Unions in Pre-Modern Europe“) names the two as one of the three primary pairs of same sex lovers in the early church, their martyrdom coming about half a century after Felicity and Perpetua, and about another half century before  Sergius & Bacchus . 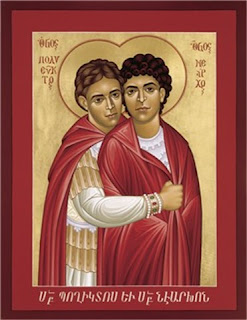 Many courts and legislative bodies since then have debated whether sodomy laws do in fact apply to women, with widely differing conclusions. In some cases, the conclusion was that they did – especially in those cases where one of the woman dresses and lived as a man, which provoked particular popular hostility.

At Jesus in Love, Kittredge Cherry has included in her post for Ash Wednesday some notes about the last lesbian executed for Sodomy in Europe, Catherine Linck.

In the image at the top of this post, German artist Elke R. Steinerillustrates the last known execution for lesbianism in Europe. Born in 1694, Catharina Margaretha Linck lived her life as a man under the name Anastasius. She was beheaded for sodomy on Nov. 8, 1721 in Halberstadt in present-day Germany. Linck worked at various times as a soldier, textile worker and a wandering prophet with the Pietists. She married a woman in 1717. Her mother-in-law reported her to authorities, who convicted her of sodomy with a “lifeless instrument,” wearing men’s clothes and multiple baptisms. The subject is grim, but Steiner adds an empowering statement: “But even were I to be done away with, those who are like me would remain.”