John Boswell was an esteemed historian who argued that homosexuality has always existed, that it has at times enjoyed wide social acceptance, and that the Church historically allowed same-sex unions.
“It is possible to change ecclesiastical attitudes toward gay people and their sexuality because the objections to homosexuality are not biblical, they are not consistent, they are not part of Jesus’ teaching; and they are not even fundamentally Christian.” 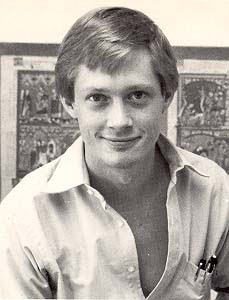 John Boswell was a gifted medieval philologist who read more than fifteen ancient and modern languages. After receiving his PhD from Harvard in 1975, he joined the history faculty at Yale University. Boswell was an authority on the history of Jews, Muslims, and Christians in medieval Spain. He helped to found the Lesbian and Gay Studies Center at Yale in 1987. In 1990 he was named the A. Whitney Griswold Professor of History.
In 1980 Boswell published the book for which he is best known: Christianity, Social Tolerance, and Homosexuality: Gay People in Western Europe from the Beginning of the Christian Era to the Fourteenth Century. In this groundbreaking study, Boswell argued against “the common idea that religious belief-Christian or other-has been the cause of intolerance in regard to gay people.” The book was named one of the New York Times ten best books of 1980 and received both the American Book Award and the Stonewall Book Award in 1981.
Boswell’s second book on homosexuality in history was The Marriage of Likeness: Same-Sex Unions in Premodern Europe, published in 1994. In it he argues that the Christian ritual of adelphopoiia (“brother-making”) is evidence that prior to the Middle Ages, the Church recognized same-sex relationships. Boswell’s thesis has been embraced by proponents of same-sex unions, although it remains controversial among scholars.
John Boswell converted to Roman Catholicism as an undergraduate at the College of William and Mary, and remained a devout Catholic for the rest of his life. He was an effective teacher and popular lecturer on several topics, including his life journey as an openly gay Christian man.
Boswell died of AIDS-related illness on Christmas Eve in 1994 at age 47.