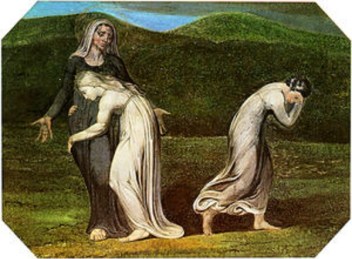 The story of Ruth and Naomi is widely quoted by queer writers as an example from Scripture of possible lesbian love: but how relevant is it? Superficially at least, it is just a simple story of exceptionally strong family affection and loyalty, between mother- and daughter- in-law. Whether in any way “lesbian” or not, the story is relevant, but not perhaps in the way usually told. To unravel the lessons it may hold for us, let’s begin with the simple story.
Naomi was an Israelite widow, living for a while (on account of famine) in Moab, where she married her two sons to Moabite women, Orpah and Ruth. The sons later died, leaving Naomi “all alone, without husband or sons” ,
She did have two daughters-in-law, and when she heard that conditions back in Israel had improved, she returned, initially taking her two daughters-in-law with her. She then had a change of heart, and encourages the two women to return to their own home in Moab. After some persuasion, Orpah did so, but Ruth refused.

Do not press me to leave you
Or turn back from following you!
Where you go I will go,
Where you lodge, I will lodge;
Your people will be my people, and your God my God.
Where you die, I will die –
There will I be buried.
May the Lord do thus and so to me,
and more as well,
if even death parts me from you.
(Ruth 1: 16-17) END_OF_DOCUMENT_TOKEN_TO_BE_REPLACED