Sergius and Bacchus are by a long way the best known of the so-called gay or lesbian saints – unless we include as “saints” the biblical pairs David and Jonathan, and Ruth and Naomi.  We need to be careful with terminology though: the word “gay” can be misleading, as it certainly cannot be applied with the same connotations as in modern usage, and technically, they are no longer recognised as saints by the Western* church, as decreed by the Vatican – but they are still honoured by the Orthodox churches, and by many others who choose to ignore the rulings of Vatican bureaucrats. The origins of saint-making lay in recognition by popular acclaim, not on decision by religious officials.

Whatever the quibbles we may have, they remain of great importance to modern queer Christians, both for their story of religious faith and personal devotion, and as potent symbols of how sexual minorities were accepted and welcomed in the earliest days of the Christian community. END_OF_DOCUMENT_TOKEN_TO_BE_REPLACED
The story of the Roman soldiers Sergius and Bacchus is well known. Polyeuct and Nearchos were similar. They too were also Roman soldiers, martyred because of their Christian faith, and in love with each other. Metaphrastes described them as one soul in two bodies, joined by boundless love. Polyeuct converted to Christianity because Nearchos was going to be executed for being Christian. Polyeuct wanted to be executed with him so that their souls would be united forever in the kingdom of heaven. 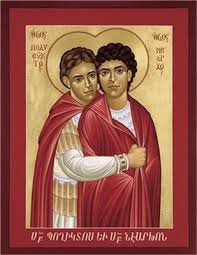